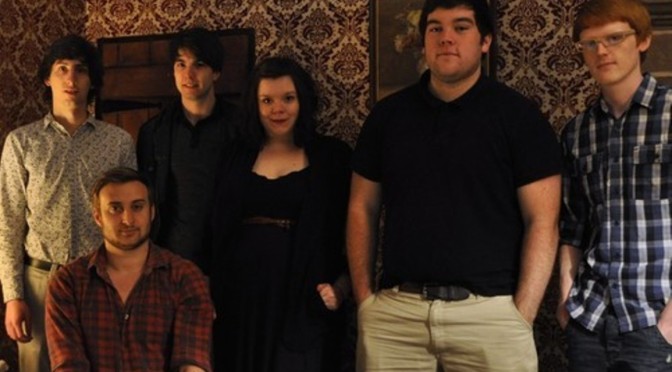 I have two guitars: one acoustic and one electric.  The former is a beautiful shade of dust and the latter is tucked out of sight in complete disarray after a fit of DIY artistry and attempt to replace parts that were not broken.  I don’t want to talk about it.  It’s like that monster-child insane movie parents lock up in the attic and feed fish-heads through a crack in the door.  The condition of these guitars is entirely irrelevant however, as I can’t play more than 4 chords on either of them.  The only instrument I can play, my midi keyboard, is lost forever in the adverse planes of my garage and so alas, I stick to writing words.

I try to refrain from comparing artists to one and other however High House’s likeness to folk heavyweights, Mumford and Sons, is one comparison which cannot and should not be avoided.  Personally I feel the two are noticeably matched in talent and musicianship, equally serving as infallible ambassadors of the alternative folk genre.  Their authentic and beautifully refined sound makes High House entirely deserving of a similar level of success.  Wake up, folk!

Fluent in banjo, accordion, glockenspiel, xylophone and more, the six-piece Staffordshire band are an impressive sight and an even more impressive sound.  As masterful of their voices as they are of their instruments, High House mould a synonym of their alliterative brother ‘harmony’ as they make the seamless blending of their individual voices both look and sound effortless.  It’s hardly believable that the six musicians have only been playing together for a couple of years!  The extent of their commitment to their craft is obvious and upon reaching the end of an individual track you are left feeling as though you’ve heard the product of many late-night studio sessions and countless tweaks and tuning.  All of their hard work definitely pays off – the proof is in the pieces.

High House are veterans to the stage with countless performances under their collective belt and have already received much critical acclaim in the unsigned folk circuit.  I have yet to see them play live but from what I’ve seen on YouTube and read in various music reviews it sounds like an experience not to be missed, hardly an unexpected consensus – simply listening to their audio tracks makes me want to fashion a tambourine out of the guinea pig cage and some polo mints.  This is an inclination only set for more enthusiasm as High House prepare to record their first EP next month.

There really is something undeniably special about this band.  They manage to balance polished professionalism with raw folk vigour, leaving none who hear their music in the dark as to their sheer talent.  I think there are very exciting things ahead for High House and I’m sure the launch of their EP will kick-start proceedings.  I would be very surprised, and very disappointed, if they aren’t on the festival circuit next Summer.  This band is the most appropriate subject for the “one to watch” cliché I’ve heard for a while, so watch out!

[Special thanks to my best-friend Edith for this discovery]