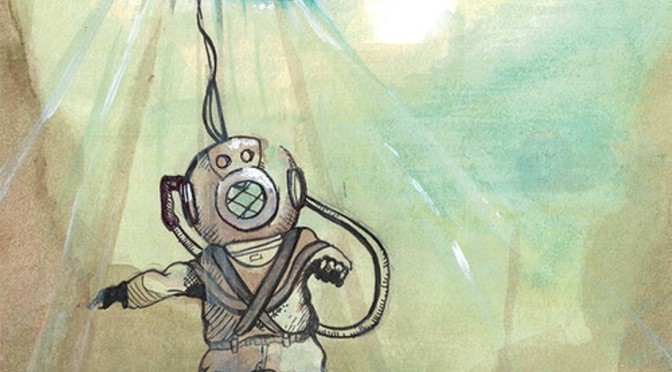 Arbor Lights are a post-rock band without the frequently habitual pomp and pretence.  Their tracks are not excessively long in title, nor in composition, and their name was inspired by their original meeting place rather than an obscure cross between a children’s nursery rhyme and the various colours of weather.  Arbor Lights are simply a band that makes great instrumental rock music.

Released in July of this year, “Hatherton Lake” is a a testament to Arbor Lights’ aptitude for balancing the ambient with the assertive.  Soft and harsh tones are expertly blended and contrasted, communicating the progression of each track so cleanly that it renders any potential vocal addition mere clutter.  Individually the five compositions are musical tales in their own right but the album itself reads like a novel rather than a compilation.  The arrangement is so masterful that by design it insists that you experience the songs as a single 41 minute event.

The opening track, “The Silent City” coaxes you in with a steady atmospheric incline spanning over a minute before you are met with a confident guitar riff, which soon heralds the arrival of a steady driving beat.  It serves as an introduction to the band as well as the album, offering an insight into how Arbor Lights’ define themselves as musicians but also keeping the listener anticipating, as though the entire track is climbing to something other than its own climax.  At the barely discernible close of the first song you are left in no doubt that it is.

The ascent of Hatherton Lake continues through “Interstellar”, by which time the band is confident enough in the listener’s engagement to completely switch up the song halfway through, meeting the gentle lead into the defining track of the album, “Damascus”; a perfect equilibrium of the soft and harsh attributes of Arbor Lights.  If you do decide to listen to the tracks individually, “Damascus” will relay the experience of the entire album effectively enough in its own right.  It is excellent.

By “Silhouettes” the album is in its prime with a loud warmth subsiding in gentle ambiance, misleading the listener into thinking the final track “The Mayor and the Diver” will serve as a winding down.  Wrong.  The conclusion to Hatherton Lake is a raucous onslaught of distorted guitar and symbol battery.  It is unlike any other track on the album yet sits perfectly in the context of the collection.  It is Arbor Light’s closing argument – you have been lulled in and kicked back out, kicked back out to sit quietly and wait for more.

Click here to take a dip in Atherton Lake